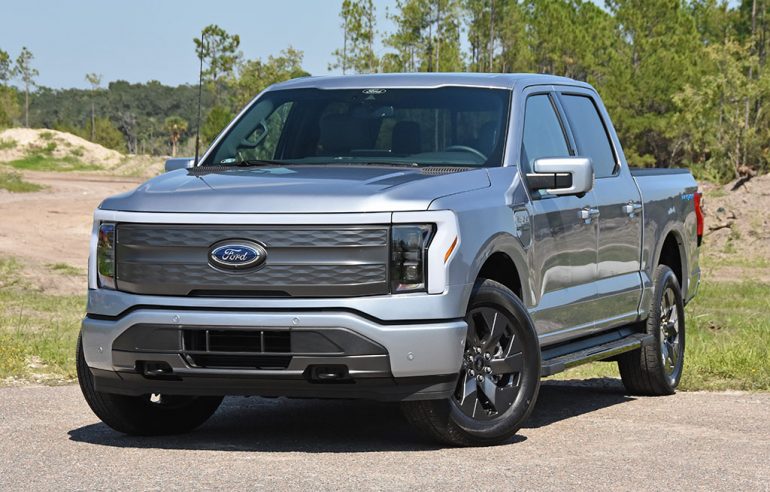 With the forthcoming emergence of electric vehicles, Ford has jumped far into the fray to bring us the very first electrified truck, the F-150 Lightning. Having experienced the new Lightning during a hurricane here in Florida this week, my experience is expanded on the full array of what the Lightning can offer outside of its achilles heel being the lacking ability to tow for a “long” range.

The all-new Ford F-150 Lightning is essentially all of what you expect out of a new F-150 gas truck in retaining the full form of what we’ve grown to expect out of the number one selling truck in America. From a quick glance, there isn’t much to differentiate the new Lightning from any other SuperCrew Cab F-150 other than a few details of the obviously closed front grille, the LED light bar design up front and on the power opening/closing tailgate, and the unique 20-inch wheels wrapped by all-season General Grabber HTS 60 tires. The bed’s side “Lightning” badge and charging port door on the driver’s side are the other giveaways along with the passenger’s side dummy door to keep a level of symmetry.

Ford didn’t hold back when it comes to giving the new F-150 Lightning ample power in more ways than one. For starters, all new Lightnings get 775 lb-ft of torque from dual electric motors, one at each axle for all-wheel-drive. The powertrain comes in one of two setups with the standard configuration having 452 horsepower and 775 lb-ft of torque with the standard range 98 kWh battery yielding a range of 230 miles, and the extended range having 580 horsepower and a 131-kWh battery giving you a range of about 320 miles in the XLT and Lariat trim, or 300 miles in the heavier Platinum trim that only comes with the extended range battery option. Opting for the extended range battery will cost an additional $10,000 in the XLT or Lariat trims. 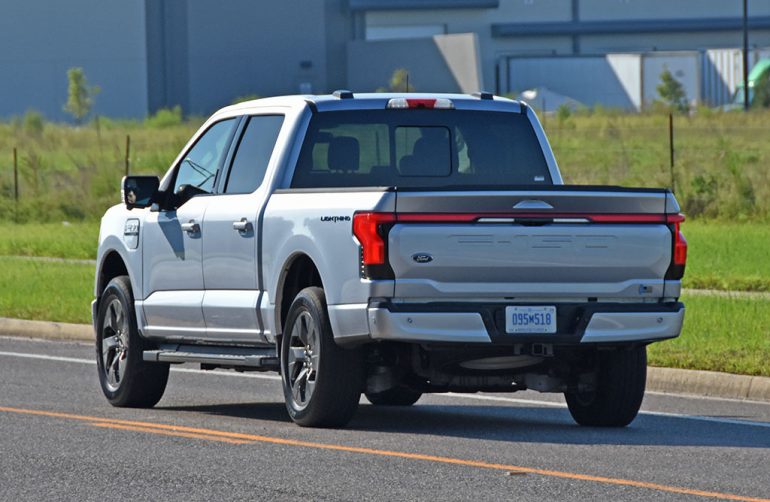 Having the Lariat trim with the extended range battery to test out this week gave me the opportunity to experience the best efforts of the new Lightning. Out on the open road, the F-150 Lightning drives like you expect with the exception being that it has all that instant torque essentially making it the fastest F-150 ever. Zero to 60 mph ticks off in just 4 seconds with a little tire barking making the 6,855-pound truck feel somewhat light on its feet. Other than the strong acceleration from the Lightning, there’s a welcomed handling attribute to the truck as there’s a lower center of gravity than you find on the gas-powered F-150 even if there’s a weight penalty of about 1,800 pounds. The suspension tuning of the Lightning to handle the extra weight and perform its trucking duties is spot on where there’s no surprise to it riding comfortably and handling as well as you expect a full-size truck to handle on the road. 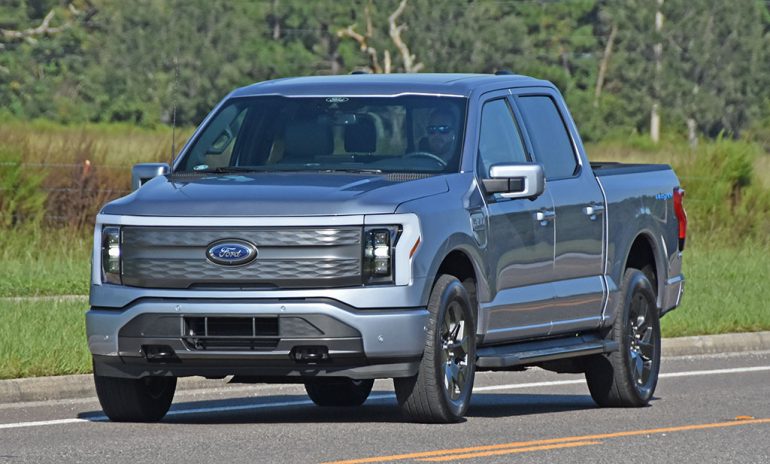 The meaty large sidewall 20-inch General tires add to the cushiness of the ride quality and are one of the only things that you hear in an eerily quiet cabin even at highway speeds. Having the electric power and instant torque available at any time helps the Lightning live up to its name where it has no issue getting up to its 110-mph governed top speed after covering a quarter mile in 12.7 seconds. Overall, the Lighting is a bit comfier and more agreeable on the road than its gas-powered counterpart.

There’s a one-pedal driving setting where the brake regen is aggressive and can essentially bring the F-150 Lightning to a complete stop without use of the brake pedal. The normal braking regen is good and at a level comparable to a gas-powered F-150 in the normal drive mode. In the Sport drive mode regen is slightly more aggressive. There is a substantial amount of energy recouped through braking regeneration where at times you may see the range increase, especially if you consistently use the clever braking coach to ensure you efficiently brake. Use of the brakes are a seamless feeling where you don’t feel much of a transition from braking regen and where the Lightning uses its friction brakes. 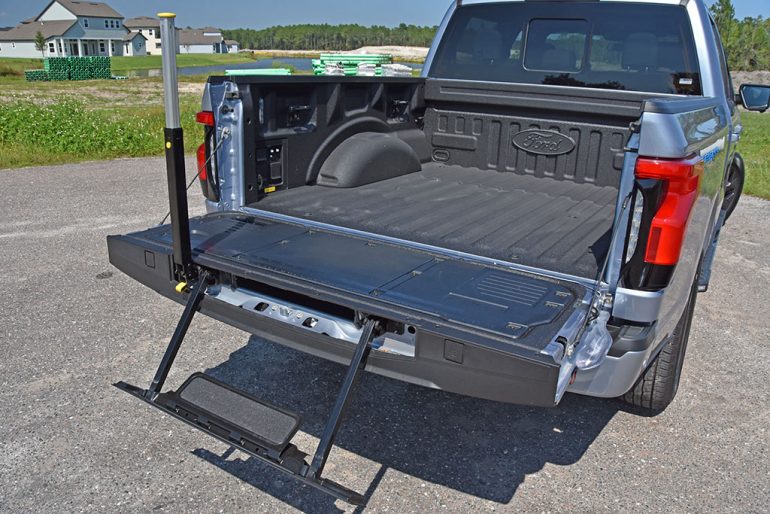 The F-150 Lighting can tow up to 10,000 pounds with the extended range battery setup and max trailering package. However, towing is far from the Lightning’s forte as it falls short to tow any reasonable distance. You’ll expect to immediately reduce the range by over 50% in some cases if you ever tow upwards of 3,500 pounds. Payload capacity is 2,000 pounds for the standard range battery and 1,800 pounds for the extended range, which shouldn’t have such a negative effect on the range as does towing. Moreover, that payload can be instantly weighed via a clever onboard scale system that is able to compensate for estimated passenger weight. My test vehicle is equipped with a trailer brake controller and the Pro Trailer Backup Assist feature to easily maneuver backing up when trailering. I’m certain in the near future this towing blunder will be addressed, as we can only hope considering how electric vehicles will dominate new vehicle sales after 2035.

The Ford F-150 Lightning is surprisingly efficient around town but on the highway or interstate range falls short of the stated 320-mile figure. In charging up the 131-kWh extended range battery of my Lighting Lariat test vehicle in 65-degree weather the computer displayed only a 281-mile range, which I assume is somewhat based on previous driving styles. The outside temperature may have also had some of a factor on the stated range, which was quite accurate for setting out on my journey consisting of an equal mix of city and highway driving. Even though I was disappointed on the 281-mile range, which ended up being spot on for a target as I was draining the battery down to about a 12% state of charge, the Lightning proved to properly estimate the remaining range. But don’t expect it to accurately estimate towing range, which is something Ford may improve upon for the range estimation and eventually its capability to tow over an “extended” range. 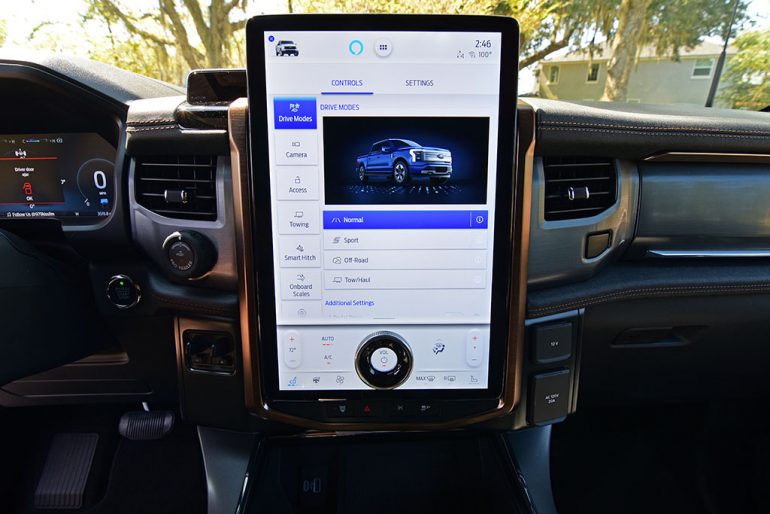 I saw between 2.1 miles per kWh to 2.5 miles per kWh on my mixed driving adventures and sometimes as high as 3.1 miles per kWh when cruising through 40 mph back roads with heavy traffic. The EPA rates the new F-150 Lightning extended range battery at 78 MPGe city, 63 MPGe highway, and 70 MPGe combined.

If you charge at home using a Level 2 48-amp 240v setup it will take 10 to 13 hours for a full charge for a depleted battery. Ford includes a charging unit (Ford Charge Station Pro) that can be used via a standard 120v outlet or with an included adaptor to hook up to a 240v outlet for a Level 2 charge. 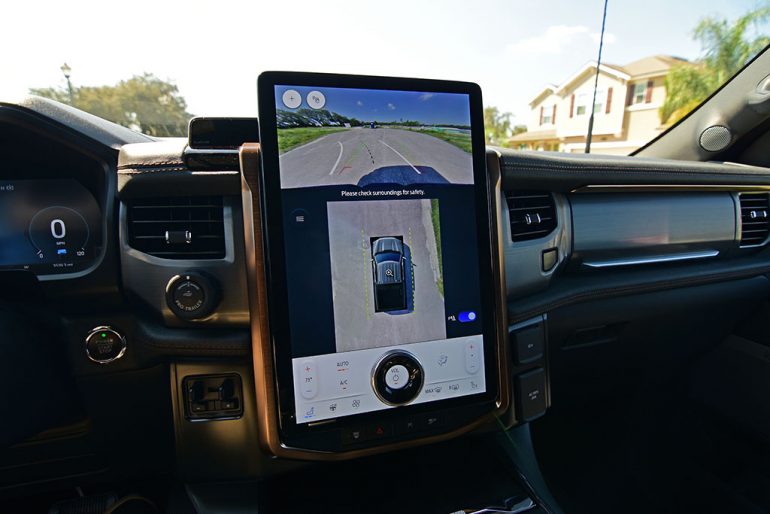 Extending the capabilities and uses of the new F-150 Lightning, there’s a plethora of power uses that you can get out of Ford’s electric truck. There are a total of 11 120-volt outlets found in my Lariat-trim Lightning test vehicle, and with it having the Pro Power Onboard generator feature, the Lighting has a 240-volt outlet and can serve as a backup power source for a house. In fact, using the Pro Power Onboard system you can power an average size house for three days or more with a fully charged extended-range battery. 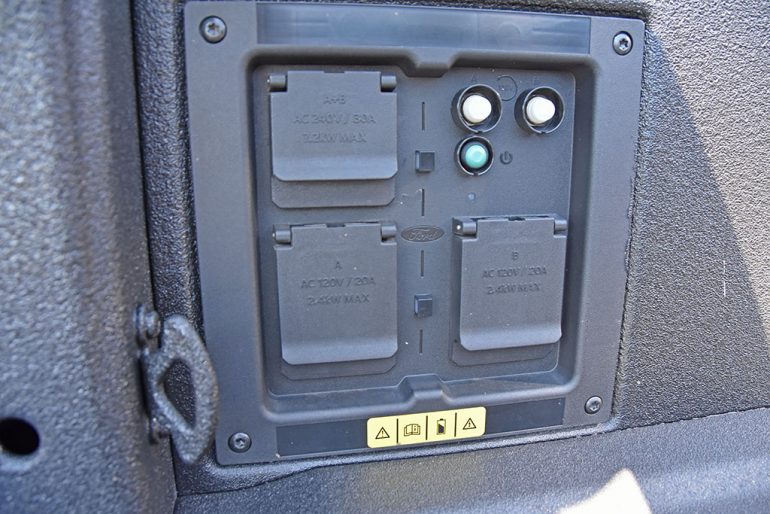 I was able to put the Lightning to the test during Hurricane Ian, which mostly spared us in north Florida when we had a power outage for a couple of hours. During this time, I only opted to use the 120-volt outlets to power a few household items (several LED lights, 3 cell phones charging, small freezer), which it obliged with no issues only using about 5% of the battery charge. The one surprising aspect is the system, which has a dedicated power button next to the tailgate outlets, only allows you to power items if the vehicle is fully ON. That means you’ll want to manually turn off the vehicle’s climate control system and lights to conserve power and extend the time for powering your household items. 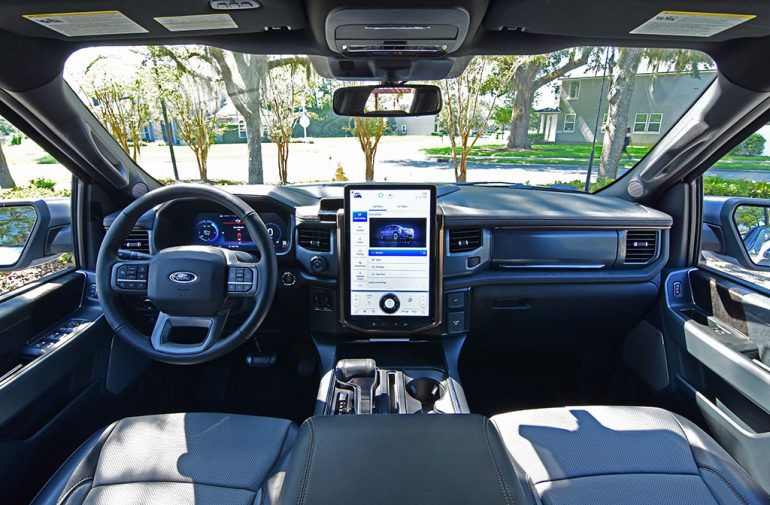 Inside, the Lightning isn’t much different from other F-150 trucks with the exception of having the larger 15.5-inch infotainment touchscreen, which is quite user-friendly and full of several useful vehicle functions and features as I found in the Ford Mustang Mach-E. 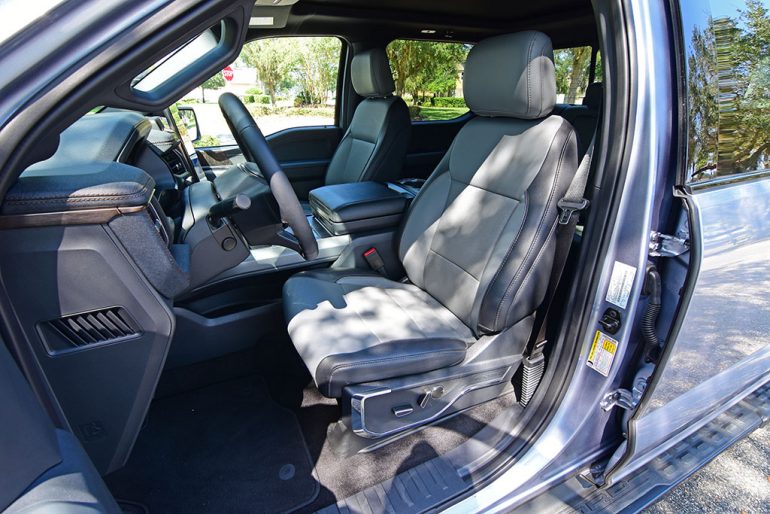 The F-150 has an added accommodation in its frunk (front trunk), which has a power liftgate opening a vast storage area that can accommodate up to 14 cubic feet of stuff weighing up to 400 pounds. This area also has a lower storage bin that can be used as a cooler where it has a lower drain to easily empty out your melted ice water. 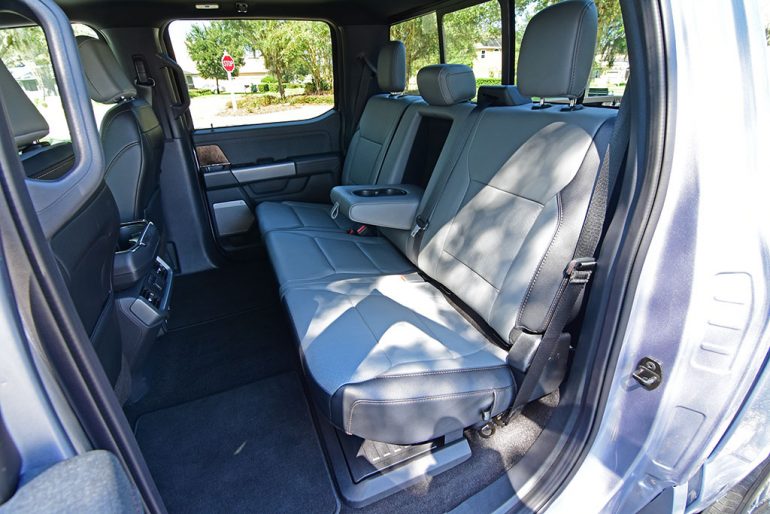 Ford includes all the available safety features for the Lightning (blind spot monitors, lane departure warning/keep assist, forward collision warning/emergency braking, rear-cross path detection, 360-degree camera system) but having the Lariat trim adds the Blue Cruise system, which I found worked well on the “approved” highways to provide an enjoyable hands-free drive. The system uses sensors to monitor your eyes so if you take them off of the road the system will alert you and require that you take over driving. There were times when the system asks to take over driving on sharp curves and in some construction zones, which I expected. 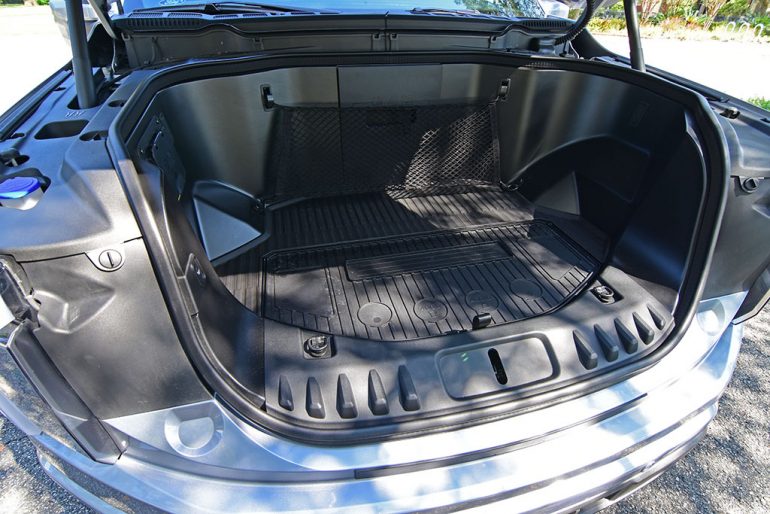 Ford has set a tone for the electrification of trucks and the new F-150 Lightning is a good start. While there are some improvements to be made, such as the dismal towing range and overall range to compete with what gas-burning trucks get, the foundation has been laid on stable ground. 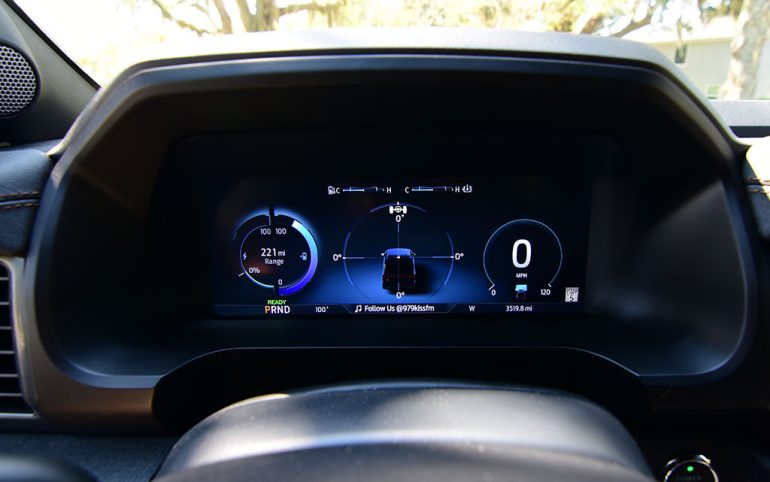 At the base level with the standard-range battery, a new Ford F-150 Lightning Pro starts at just $40,000, which is a respectable level price in my view. On the other hand, the one area for improvement would be a better price scale for the upper-level trims, considering my new Lightning Lariat test vehicle comes at a slight premium setting you back about $90,000. However, the new Lightning is a rare find where supply is low, but demand remains high during this time of chip shortages. If you can pay MSRP, do it, and be proud that you have something that everyone else is looking at – almost as if you were driving an exotic car – yes, it’s that popular and cool, beating everyone else to the mass market EV truck segment.